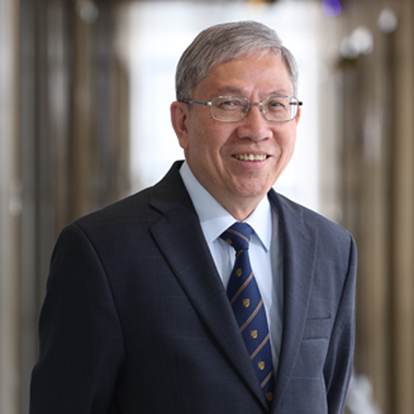 Chan Wai-yee obtained his B.Sc. (Hon. 1st Class) in Chemistry from The Chinese University of Hong Kong in 1974 and Ph.D. in Biochemistry from the University of Florida, Gainesville, Florida, USA in 1977. He served as tenured Assistant to Associate Professor at the Department of Pediatrics and Department of Biochemistry and Molecular Biology, University of Oklahoma Health Science Center, Oklahoma City, OK, USA from 1979-1989, and tenured Professor, Department of Pediatrics and Department of Biochemistry, Cell & Molecular Biology, Georgetown University Medical Center, Washington, DC, USA from 1989 to 2009. He was jointly appointed at the Eunice Kennedy Shriver National Institute of Child Health and Human Development (NICHD), National Institutes of Health (NIH), USA in 2001 and helped found the Laboratory of Clinical Genomics. He was later appointed as Head and Principal Investigator of the Section on Developmental Genomics, NICHD. In June 2009 he became Chair Professor of Biomedical Sciences and Director of the School of Biomedical Sciences, Faculty of Medicine, The Chinese University of Hong Kong. Currently he is also the Director of the Institute for Tissue Engineering and Regenerative Medicine, CUHK, and Director of CUHK-BGI (Beijing Genome Institute) Innovation Institute of Trans-Omics. He also serves as Director for several joint laboratories including the CUHK-Shandong University Joint Laboratory on Reproductive Genetics, CUHK-Chinese Academy of Science (CAS) Guangzhou Institute of Biomedicine and Health Joint Research Laboratory on Stem Cell and Regeneration, CUHK-CAS Kunming Institute of Zoology Joint Laboratory of Bioresources and Molecular Research in Common Disease, and Ministry of Education (MOE) Key Laboratory (CUHK-Jinan University) on Regenerative Medicine. In January 2017 he became Master of CW Chu College. In May 2020, he was appointed as Li Ka Shing Professor of Biomedical Sciences.

Professor Chan's expertise is in the molecular genetics of human reproductive and endocrine disorders, biochemical genetics of inborn errors of copper and zinc metabolism, functional genomics and epigenomics of germinal stem cells and reproductive tumors, and non-coding RNAs in the differentiation of human induced pluripotent stem cells (iPSCs). His research resulted in 7 patents, 5 books, 29 book chapters, and over 200 articles published in international peer-reviewed scientific journals.

Professor Chan serves as editor/associate editor of 8 international scientific journals and as member of the editorial board of 16 others. He is a reviewer for a number of research granting agencies including the National Institutes of Health, USA, the Wellcome Trust and Health Research Board, UK, the Science Foundation of Ireland, the French National Alliance for Life and Health Sciences and French National Cancer Institute, INSERM, France, and the Macau Science and Technology Development Fund, Macau SAR. He is also a member of the Grant Review Board, Food and Health Bureau and the Biology and Medicine Panel of the Research Grants Council, University Grants Committee, Hong Kong SAR. Professor Chan is active in the community, serving as member in several public offices, including as a Specialist for the Hong Kong Council for Accreditation of Academic and Vocational Qualifications. He has also served in a number of professional academic societies, including as President of the Association of Chinese Geneticists in America, USA and as a member of the Development Committee of the Society for the Study of Reproduction, USA. Currently he is the Executive Director of the Association of Chinese Geneticists in America, USA, a member of the Board of Directors of Joshua Hellmann Foundation for Orphan Diseases, President of Hong Kong Institution of Science, a member of the Council of the Shaw Prize Foundation, a member of Hospital Authority Board, and a non-official Director of the Hong Kong Genome Institute.

Professor Chan has received a number of honours including Honorary Member of the Chinese American Medical Association, New York, in 1992, a Distinguished Faculty Tutor, School of Medicine, Georgetown University in 1997 and a Distinguished Mentor Nominee, National Institutes of Health, in 2005 and 2006. He was also a recipient of the 1988 Merrick Award for Outstanding Biomedical Research from the Oklahoma Medical Research Foundation, USA, 1989 Service Award from the University of Oklahoma Health Sciences Center, USA, and the 2008 Presidential Award from the Association of Chinese Geneticists in America, USA.